A Collection of Must Have Atom Packages

The Atom editor calls the extension plugins Packages. The packages can add a new functionality, extend the existing functions or completely replace them. Even the core functions can replaced by an external package.

How to Install Packages

Installing directly from the Atom Editor

It is really easy, in the Setting panel (Ctrl + ,) go to the Install section, search for a package and press the Install button.

Alternatively you can install packages from command line using the apm command. Run apm install <package> to install the package. You can also pass multiple packages for mass installation.

You can mark a package with star - unfortunately only at the Atom web pages, not from the editor itself. Then you can install the starred packages with command apm stars --install command.

Note: It will install all starred packages, you cannot select individual packages or change the list before installation. So really check what the bundle contains!

There are thousands of Atom packages available so it means there is a wide variety of packages and you almost sure find a package for a feature you miss.

But that also means there might be several packages providing the same functionality, there might be forks of the same packages, there might be low quality packages… This is a similar situation like with Rubygems, you have to spend some time searching for the best option.

You can use the download number as a very roughly indicator, a high download number usually means the package is good. (Obviously this metrics does not work for the newly published packages or for very specific packages…)

Another drawback of too many packages is that there might be conflicts between packages by chance. The keyboard shortcuts can easily get in conflict because there are not many possibilities for unique and simple shortcuts.

If a shortcut does not work for you then look whether it is actually defined properly in Settings -> Keybindings section. Or you can press Ctrl+ . (dot) to display the keybinding resolver which displays all actions for the pressed keys.

There are two possibilities how to resolve a conflict:

If the packages conflict at the UI level (using the same UI element, that can happen if you install another fork of a package) or at the program level then you should probably report an issue at GitHub and ask the maintainers to solve the conflict.

[Note: Some screenshots are linked from the project pages.] 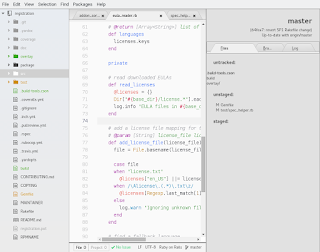 I currently combine both, git-plus has direct shortcuts while atomatigit is more interactive (e.g. you can select which changed files to stage and commit).

These packages provide syntax highlighting and support for other file formats and programming languages which are not included in the default set:

Of course, you can find support for many more languages, just check the available packages.

These packages can help you with Ruby development. 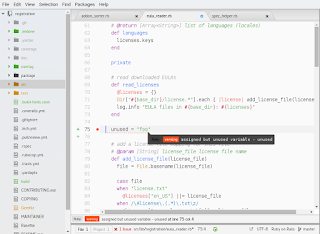 For building the sources I basically found two systems:

I tried both and it seems that the build package is a bit better from the usability point of view. build-tools use more complicated keyboard shortcuts and require manual configuration while build tries to autodetect the tools used (scans for "Makefile, Rakefile, etc…). 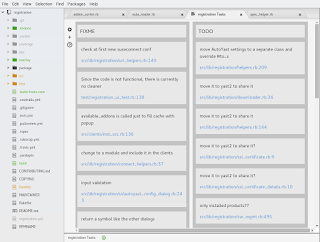 I found some quite interesting plugins which nicely show the flexibility of Atom. 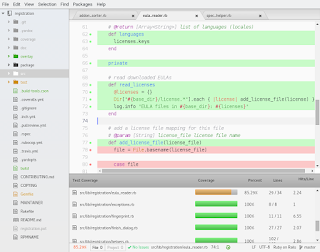 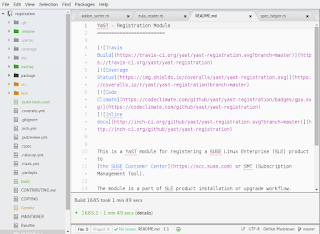