Do you use Git?

Have you ever committed a change into a wrong branch? Have you ever started working on a feature/bug fix without pulling from remote and thus need to rebase and resolve conflicts later? Have you ever forgotten your stashed changes?

Recently I was looking for some tool which would help me to avoid the problems mentioned above.

At first I tried sexy-bash-prompt, but I didn’t like the default scheme, it was too different to the usual openSUSE bash command prompt. I tried to customize it, although the code allows some customization I could not make it look like the openSUSE default.

Then I tried bash-git-prompt. This tool is similar to sexy-bash-prompt, but provides more details about the git status. What I really like:

I really recommend to give it a try if you use Git from command line, it can save you same headache…

If you want to update it later just run git pull in that directory.

Again the default style is too different, but it turned out that the color and the style can easily changed and bash-git-prompt already provides several styles out of box.

So I decided to create a new style which would mimic the default openSUSE bash prompt as close as possible so you would not notice that you are using bash-git-prompt if you are outside a Git repository.

To use bash-git-prompt with the openSUSE theme simply add this to your ~/.bashrc file:

The next time you start a new shell session bash-git-prompt will be automatically loaded. 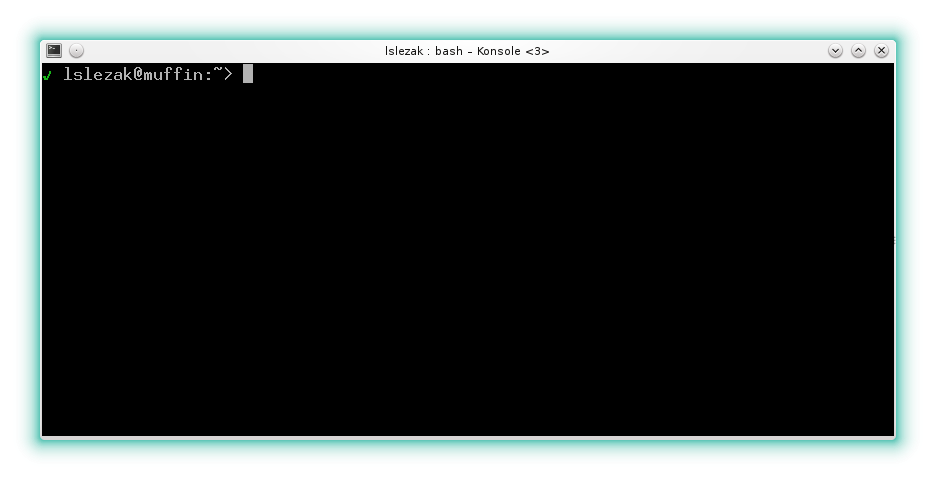 Except the exit status at the beginning of the line it looks like the usual openSUSE bash prompt.

Let’s see how it can help with Git: 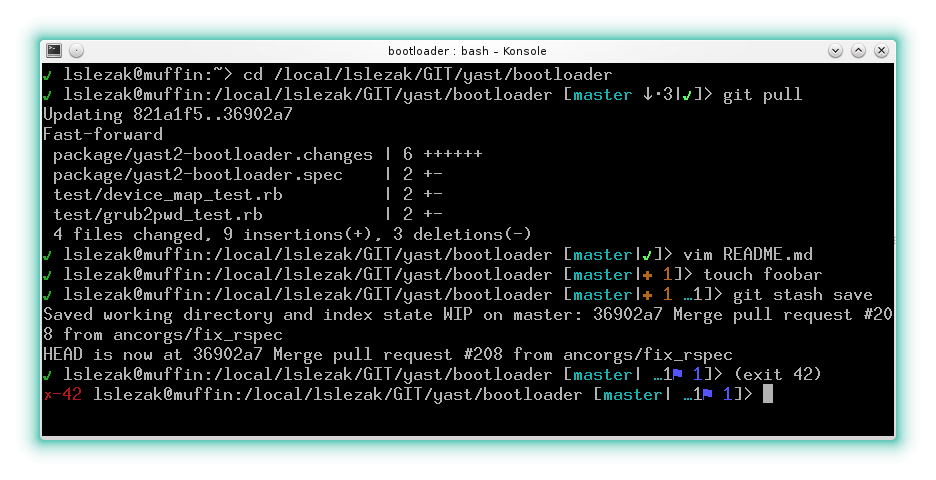 Note: If you do not like the exit status indicator at the beginning of the line then use Single_line_NoExitState_openSUSE theme instead.

You can run git_prompt_help to see what the used symbols mean: 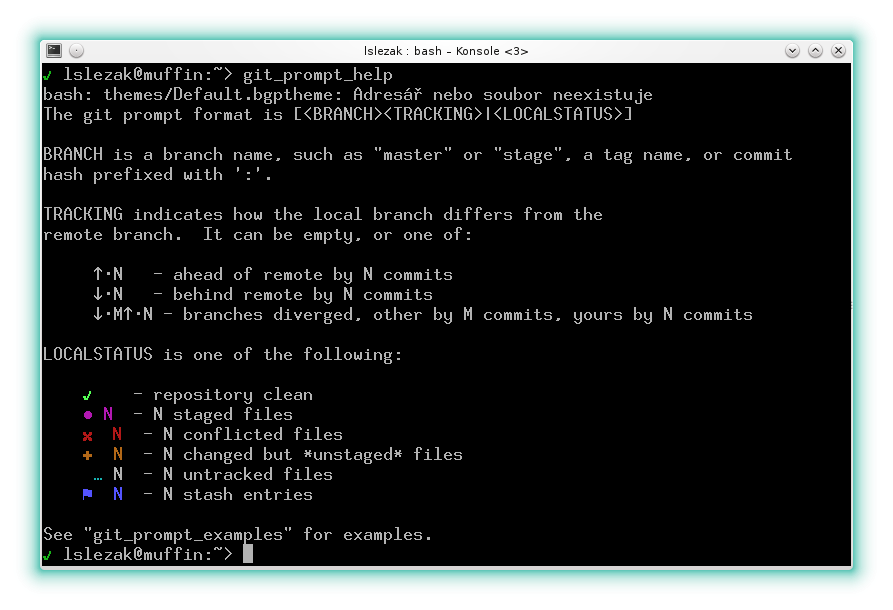 There are also some examples displayed by git_prompt_examples command: 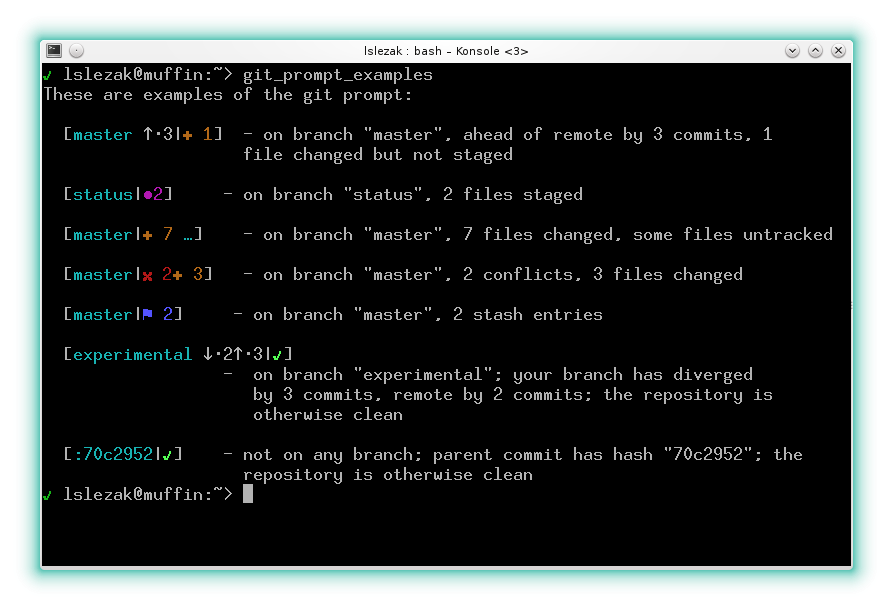 And if you want to change the colors used in the style you can use git_prompt_color_samples to see all colors available (note: this depends on the terminal configuration, the colors might not be the same in a different terminal): 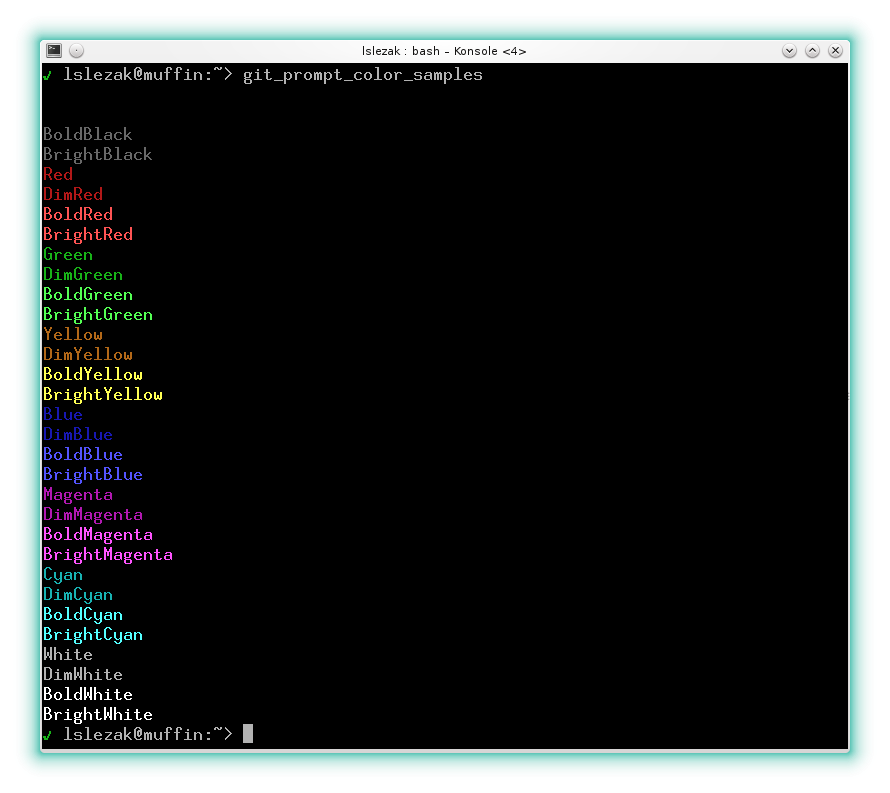 I noticed that bash-git-prompt does not work correctly when you use Midnight Commander (mc). The problem is that it overwrites the PROMPT_COMMAND shell variable (see more details at https://www.midnight-commander.org/ticket/2027).

My workaround it to define an alias in ~/.alias file:

and run gp whenever you want to use the bash-git-prompt functionality in mc subshell.

(The ticket above contains a patch for MC, but you would need to recompile it from sources and maintain it yourselves, i.e. keep it up to date if a security fix is released…)